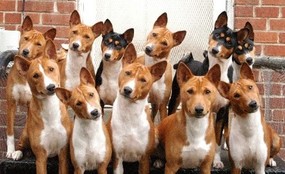 Important Proportion:
Distance from top of head to stop slightly more than from stop to tip of nose.

Behaviour/Temperament:
Barkless but not mute, its own special noise a mixture of a chortle and a yodel. Remarkable for its cleanliness in every way. An intelligent, independent, but affectionate and alert breed. Can be aloof with strangers.

Head:
Fine and profuse wrinkles appearing on forehead when ears pricked; side wrinkles desirable but not exaggerated into dewlap, wrinkles more noticeable in puppies, but because of lack of shadowing, not as noticeable in tricolours.

Facial Region:
Nose: Black nose desirable.
Jaws/Teeth: Jaws strong with a perfect, regular and complete scissor bite, i.e. the upper teeth closely overlapping the lower teeth and set square in the jaws.
Eyes: Dark, almond-shaped; obliquely set, far-seeing and rather inscrutable in expression.
Ears: Small, pointed, erect and slightly hooded, of fine texture, set well forward on top of head, tip of ear nearer centre of skull than outside base.
Neck: Strong and of good length, without thickness, well crested and slightly full at base of throat with a graceful curve accentuating crest. Well set into shoulders giving head a lofty carriage.

Coat:
Hair: Short, sleek and close, very fine.
Colour: Pure black and white; red and white; black and tan, and white with melon pips and tan markings on muzzle and cheeks; black; tan and white; brindle: red background with black stripes, the more clearly defined the stripes the better. The white should be on the feet, chest and tail tip. White legs, blaze and white collar optional.

Faults:
Any departure from the foregoing points should be considered a fault and the seriousness with which the fault should be regarded should be in exact proportion to its degree.